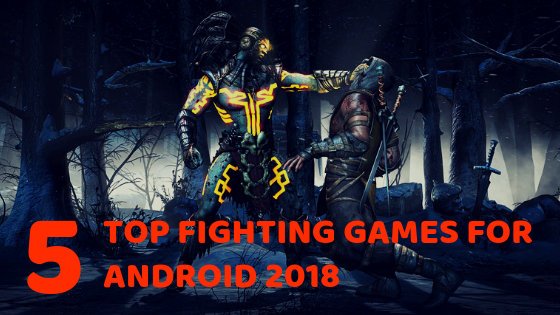 Fighting games have always been the favourite division of gamers. But if we look at Android then we can not see it, Some gamers think that they do not have many choices in Fighting Genre for Android. But If I believe it is not at all. In 2018 some gaming production houses have released very great games. From which we can hope that the fighting category on Android will improve over time. Here I’m shooting my top 5 Fighting Games for Android 2018.

Mortal Kombat X is my favourite fighting Android Game, I’ve already finished it twice. I feel like this game is a genuine time pass. I find it hard that you will be bored playing it. you can experience very amazing action in this game, especially the X-ray attacks that strike very much.

Mortal Kombat X is developed by NetherRealm Studios and published by Warner Bros. It requires a 1.5 GB of storage space and at least 1 Gb of Ram to play. Its minimum required age is 16 because the fight within it is not worth seeing children under 16. You can download this game from here.

What is my second favourite Android game from the list of top 5 fighting games for Android 2018 is WWE Immortals, this game is based on WWE pro wrestling. Its gaming style and features are just like Mortal Kombat X. But we can say that this is a little less dreadful than it. Because of this kids below 16 years of age can also play this.

I’ve finished it once, but when I wanted to play it again, there were some technical problems with it. so maybe you have a little problem playing this. This game is very good in terms of graphics. you will be excited to see the action.

This game was also developed by NetherRealm Studios in conjunction with Phosphor Game Studios. This game is available free of charge on both app stores. It requires 1.2 GB of storage space and at least 1 Gb of Ram to play. You can download this game from here.

Injustice’s gaming style is like Mortal Kombat and Immortals. This fighting game is based on the DC Comics fictional universe. This game was developed by NetherRealm Studios and published by Warner Bros. The one which lacked me in this game is that there is very little variation in the attack which makes this game just the button mashable experience. You can definitely pass the time with this game but not much. But in many ways, it is better than many of the games. from which it is worth taking entry to the list of top 5 fighting games for android.

Injustice 1 requires 1.5 GB and Injustice 2 requires 1.2 GB of storage space and at least 1 Gb of Ram to play. If I tell my experience then I would like Injustice 1 more than Injustice 2. You can download this game from here.

This game will look very nice to those who like ninjas and samurai. It’s a very challenging game, maybe that’s why it’s so much fun to play it. Its story mode is very nice and it’s very tough to fight stage bosses in this game.

Battle Bay is my fifth choice for the list of top 5 fighting games for android 2018. This is the first real-time multiplayer game from Rovio. Rovio is the same production house that had released Angry Birds. In Battle Bay, you can team up with 5 players and challenge opposing teams online in real-time battles. Download this game from here.