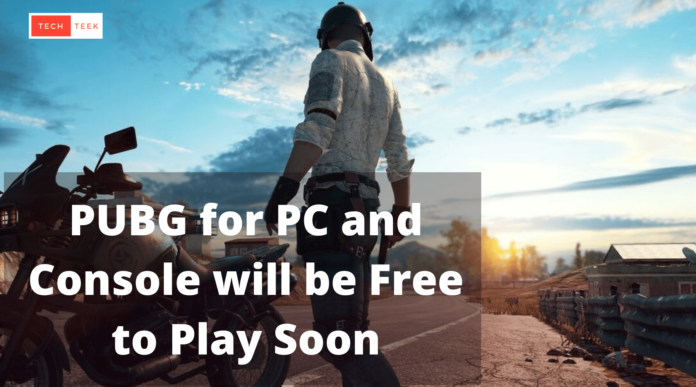 Beginning January 12, 2022, PUBG: Battlegrounds will be a free-to-play game. Krafton just announced that the popular battle royale shooting game – PUBG for PC and consoles would follow the lead of its mobile counterpart and become completely free to all players.

When this change takes effect, the game will offer Battlegrounds Plus, a paid subscription-based account that will grant players access to special in-game benefits.

The game’s switch from paid to free-to-play will encourage more players to join and enjoy the game on a larger display of a PC/gaming monitor with an extensive set of controls.

Players who have already purchased the game will receive a PUBG Special Commemorative Pack, which contains Battlegrounds Plus and other in-game stuff.

When PUBG: Battlegrounds first came out on Steam in 2017, it was a paid battle royale multiplayer game. Back then, the game was known as PUBG (PlayerUnknown’s BattleGrounds), gamers and their friends had to purchase it to play it single or with others.

The game was a big success, and in the same year, we saw PUBG Mobile, a mobile version of the game. The main difference was that the mobile version was a completely free-to-play game that anyone could download from the Google Play Store or the Apple App Store and play with their friends right away.

The revenue of PUBG mobile generates revenue from in-game ads and the game’s Royal Pass, which contains Weapon skins, dresses for player characters, and celebration moves. This was accomplished by using two types of in-game currency: golden coins for all players and UC for those who spent real-world money in-game.

On the other hand, the game has been fair to both paying and non-paying players, providing no competitive advantages and benefits that mainly consist of cosmetic modifications.

Freemium mobile games, such as PUBG Mobile and the recently released PUBG: New State, have gained a lot of traction, competing with titles like Fortnite Mobile, Call of Duty: Mobile, and Garena Free Fire.