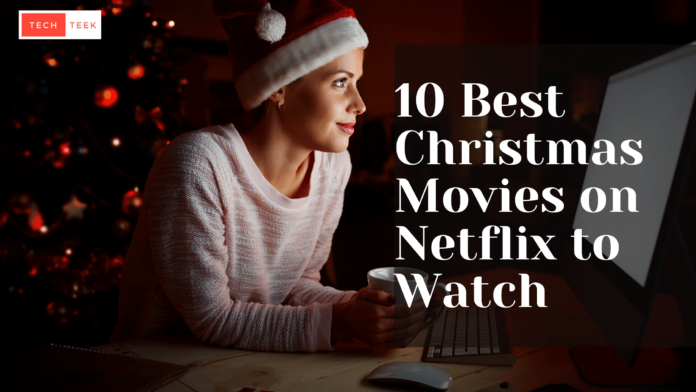 It’s that time of the year again! Time for family and friends to prepare for a big Christmas celebration for the whole family. Some prefer to watch these films on the big screen at home, while others prefer to view them on a large screen in the comfort of their own home.

Unsurprisingly, Netflix provides a wide selection of holiday films that can relate to any age group or genre, but whether you’ve been naughty or good, we’re here to provide you with a list (that we will double-check) of the 10 best Christmas movies on Netflix this year.

A Boy Called Christmas stars Maggie Smith, Kristen Wiig, Michiel Huisman, and Sally Hawkins, and is based on Matt Haig’s bestselling novel of the same name.

Nikolas (Henry Lawfull) is a typical young boy who misses his father during the holiday season. As a result, he sets out to find his father in Elfhelm, the mythical elven village.

Nikolas is accompanied by his fearless reindeer Blitzen and his faithful pet mouse, and they quickly find themselves in the middle of an astonishing adventure that reveals nothing is impossible.

Nina Dobrev stars in this new Netflix original holiday film as a woman who falls in love with a man she only knows through her dating app. When she decides to surprise him by going to see him for Christmas, she is taken aback when she discovers that her dream man isn’t who she thought he was.

However, she did fall for a guy who, at least physically, exists. Is the guy she really wants hiding under her dating app, or can she convince him to notice her?

Jingle Jangle is a timeless Christmas musical. The plot follows Jeronicus Jangle (Forest Whitaker), a toymaker and shop owner who runs into trouble when his faithful employee, Gustafsan (Keegan-Michael Key), flees with the inventor’s latest marvel, a sentient matador doll named Don Juan Diego who refuses to be mass-produced. Diego and Gustafsan conspire to steal Jeronicus for his hard work.

Years later, following the death of his wife and alienation from his daughter, Jangle is visited by a local banker, Mr Delacroix (Hugh Bonneville), who warns him that unless he comes up with new successful innovation by Christmas, he will lose his now-failing shop.

When all hope appears to be lost, Jangle’s daughter and aspiring inventor granddaughter may be the only thing that can save the down-on-his-luck tinker. This is a holiday spectacular you’ll never forget, lovingly filmed and extravagant in every aspect.

This Christmas film, starring Kurt Russell as Santa Claus, was one of Netflix’s most popular original films of 2018. Santa gets trapped in Chicago on Christmas Eve owing to the tricks of a couple of children, and it’s a race against time to reunite him with his sleigh and reindeer. If he doesn’t finish his annual gift-giving before Christmas Eve, the world will be devoid of that wonderful holiday spirit.

Russell’s portrayal of Santa as a hip grandfather is spot on, and the film itself is entertaining to see with family and friends. The sequel, The Christmas Chronicles 2, is also available on Netflix to stream.

This Netflix original film was nominated for Best Animated Film in 2019 at the Academy Awards. This film is essentially Santa Klaus’ origin narrative. Klaus, a modest toymaker, meets a postman who lives in the far northern parts of the world. Together, they begin distributing toys to local kids, and Klaus begins to take on the role of Santa Claus that we all know and love.

The film features magnificent, painterly visuals as well as quirky individuals populating the village, where the spirit of Christmas is set to undo an ancient enmity between two clans.

White Christmas is still best known for its popular title song, but it’s much more than that. Bing Crosby and Danny Kaye feature as Army comrades who team up as nightclub artists after WWII in this charming musical.

They fall for two female singers (Rosemary Clooney and Vera-Ellen) and spend Christmas at a wonderful Vermont inn, where they put on a performance to lure people to the snowbound. Various misunderstandings ensue, but in the end, romance and Christmas kindness triumph.

Bill Murray’s take on the legendary Christmas special, directed by Sofia Coppola and featuring an unusual cast of celebrity guest performers, is more of a feeling than a movie. Murray stars himself, frozen in at a New York City hotel where he’s supposed to be filming a Christmas special.

After the show is cancelled, he mingles with hotel guests, sings a few songs, and becomes intoxicated. Murray’s lovable laid-back personality, as well as cameos from Chris Rock, George Clooney, Miley Cyrus, Maya Rudolph, and others, propel the tale forward.

The plot revolves around Amber, a budding young journalist who is sent to cover a press conference about a prince who is ready to ascend the throne after his father’s death. She is informed he is a reckless playboy, but after being mistaken for his sister’s tutor, she meets the real him and, surprise, surprise, she falls for him. It’s completely predictable, but that’s exactly what you want from a Christmas movie sometimes.

In the delightful Let It Snow, a throwback to the ensemble adolescent comedies of the 1980s and 1990s with a Christmas twist, a variety of young relationships play out over Christmas Eve. As the local diner transforms into a holiday hot spot in the icy, sleepy small town of Laurel, Illinois, attractive youngsters couple up, split up, makeup, and party down.

The Knight Before Christmas

The Knight Before Christmas is the last film in our Best Christmas Movies on Netflix list. It’s 1334 Cole Christopher Fredrick Lyons (Josh Whitehouse) meets an enchantress in Norwich, England, and she gives him the ability to travel through time.

She also assures the little cherub that he will never be a true knight unless he completes a mysterious quest. Cole has whisked away to a Christmas-themed town in Ohio, where he meets Brooke Winters (Vanessa Hudgens), an anti-chivalry high school teacher.

In the weeks leading up to Christmas, the stars align for Cole and Brooke, and these two lost souls begin to fall in love. The Knight Before Christmas is a sweetened Netflix romance with a sprinkle of Christmas joy thrown in for good measure, making for a hard-to-turn-down final course.

These are our recommendations for the top Netflix Christmas movies that are currently available or will be available in the coming weeks. We’ll update the list as new alternatives become available on Netflix.